I received my Bluum subscription box in the mail today, and was pleasantly surprised!! I got an e-mail at about 2 PM with a tracking number, and it arrived on my doorstep at 4:50 PM ( Yes…I get my mail very late, which is such a bummer sometimes!)

I was EXTREMELY worried about my Bluum box. I had been on their Facebook page and there were awful complaints about last months box, shipping, customer service, etc. I was wondering what I got myself into. I have to say I was pleasantly surprised! I was a bit confused how some things went with the “theme,” but all in all I’d say it was a nice box!

Lets start with what the box is about. Bluum is a monthly subscription box for babies/toddlers and moms. It is 24.95 a month and includes sample and full size items. I was disappointed that there was not a product card with the items, instead they state on the card in the box, that you can log onto your account to learn about the products in your box and earn rewards points for reviews. I did go on my account and it does not show anything about the box as of today. I will keep you updated!

**Please don’t mind the photos! I have such awful lighting where I took the pictures!

The March box theme was VROOOM: Stay indoors and play MAKE BELIEVE with your toddler.

Here is a first look at what was inside the box! It does look full! 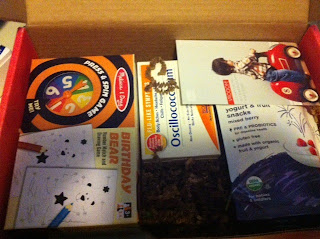 Okay..Now lets get to the good stuff.. The first items I pulled out were the snacks. There was a full size bag of Happy Yogis (1 oz) and a full size bag of Happy Munchies (Apple flavored Whole Wheat Rice Cakes.) Molly did not care for the Rice Cakes much. I tried them… they were alright. The Happy Yogi’s I felt, were on the “Young” side for Her. She is 26 months, and probably hasn’t had these since she was 11 months. They are yummy though! The Happy Yogi’s retail for 4.21 and the Happy Munchies retail for 3.59. 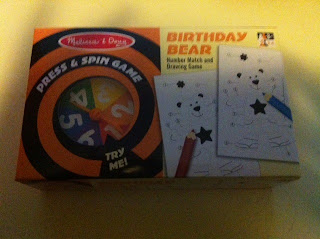 Now, on the totally different end of the age spectrum would be this game. It is a Melissa & Doug Press and Spin Birthday Bear game. Looks to me as if you spin the dial, and whichever number you land on you color the appropriate spot on the bear. It seems to retail for approximately 5.99. The age on the top right says 3+, I think its absolutely adorable and will be saving it for future use, but I do think it is a little too old for her right now. 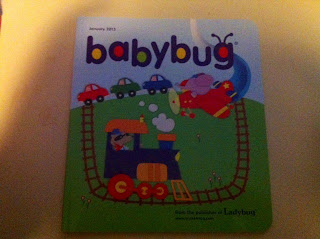 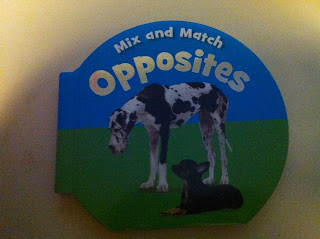 Here are the two books that came in the box. The first is a magazine type book called BabyBug, but the inside is very cute. I wouldn’t even know how much this would retail for, but it seems to be a part of the  cricket magazine subscriptions. It is also the January 2013 edition, but it does go with the VROOM/Make Believe “theme.” The second book is a Mix and Match Opposites flap book, which Molly loved right away. It is a very nice book. The back says it retails for 4.99. 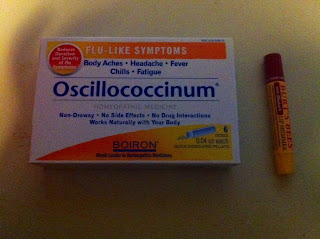 The last two things I took out of the box would definitely be on the mom side of the monthly box. I LOVE the Burts Bees Lip Moisturizer. This is great! I have used it for years. It is slightly tinted so you can use it as a “lip stick” if you desire. I also like the color ( Rhubarb!) On Amazon it retails for 5.74. The Oscillococcinum, is something I have never seen before but would be willing to try! Who wouldn’t want to fight the flu!! It seems to retail for approximately 8.00 ( give or take)on amazon.
Total Cost of Box: 24.95
Total Cost of Products within the box (Give or take a few dollars): 32.52
To say the least I was not disappointed with this box and will definitely try Bluum for one more month. I have never seen Molly so excited to get something in the mail, and I’m hoping their next box will be spring related. Did you receive the March Box? What did you think about it?
If you are interested in Subscribing to Bluum or want to learn more please click here: Bluum
I got 5.00 off of my first box with the code BluumVIP. You have to be “invited” to join (once you put your e-mail address in,) so I’m not sure if it is a different code each time.
** I was not paid for this review. It was my personal take on the March Bluum Box. Posts may contain affiliate and referral links.