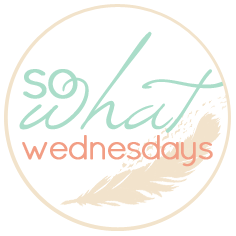 -So What…if i downloaded Candy Crush. Holy Moly, why did I do that. I was up until after midnight playing. Bad idea Alena…Bad idea!
-So What…That I’m obsessed with RHOC. I just cant get enough of it! Who watched Mondays Episode? I actually thought it was a calm episode. Heather did really well acting, and why in the world is Alexis taking acting classes… I know that, that is how you learn but she’s awful!
-So What…That all i want to eat is ice cream. Last night it was so very hot in our apartment, like ridiculously hot. I’m not ready for this hot weather yet!!
-So What… That i have been on a winning streak the past couple of days! I won two contests and won money at the casino! Woohoo! I’m not bragging at all-just super excited because I don’t win anything!
-So What…If I’m so excited about my FIRST GIVEAWAY. Go enter! It’s awesome!
What are you saying SO WHAT to this week?