Skip to content
Its time for some Thursday Thoughts!
~Molly is on her way to being potty trained!! She has been in underwear for two days now with only one accident! This calls for a celebration!! I had to share!
~ RHOC…Um who saw this? It was insane, risky, woah! I like to have fun, but those guys were gross! I would have been so grossed out, ew! ha ha! Otherwise, good episode. Next week looks even better, Lydia is getting a mouth on her (with Gretchen) and Brooks shows up? Huh!? Even more confusing is I turned on Bravo last night and that episode was on? I thought RHOC was on, on Mondays? I’m lost here!!
~ My dog is reverting back to being a puppy, I don’t get it. I’m still giving him the same attention, maybe even more? He ate Mike’s pillow the other day! What the heck?
~Cars 2, has anyone seen this? I’m so confused, what in the world is going on? It’s like a James Bond Cars, I don’t like this!!
~Don’t forget Thirty-One’s spend 35.00 and get a Large Utility Tote deal is only for the month of JUNE. Take advantage of it, its really a great deal! Also, I’m offering an extra 25.00 credit for anyone who hosts an online party in June! Contact me today, OR visit my website HERE!
~I still have no idea what we are doing for Father’s day! What are you guys up to?
Have a wonderful Thursday! 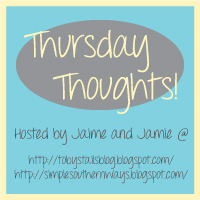